Katja started riding at a very young age at a riding school together with her mum, it was here that Katja’s passion for horses and riding started.

Katja Started her education at the Equine school in Deurne the Netherlands. During Katja’s first year at Deurne she did her first internship at Edward Gal and Nicole Werner’s stable, following up the next year working a the stable of  Nico Witte where she had the opportunity to work with stallions such as Von Tango and Winton. Katja gained a lot of experience from her studies and her internships which lead her to begin her own training stable in the beginning of 2008 in Nuland, where she is training horses from the beginning to Grand Prix.

Katja had her international Grand Prix debut in 2011 on her beloved Gribaldi x Amor gelding ‘Thriller’.

Thriller was bought as a 3 year old  by the family Gevers. Thriller was not the easiest of characters and took some difficult paths along the way but to her credit Katja trained Thriller herself up to international Grand Prix level.

Katja and Thriller are currently on the A Squad for the Netherlands and consistently growing together at international Level.

Katja has also a string of top quality young horses provided to her by her very supportive and loyal owners and sponsors, together with  the families very own successful breeding program, with there stand out trade make being the ride ability of all there young stock. 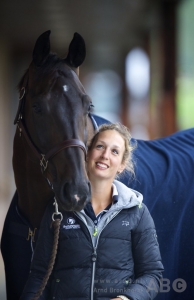